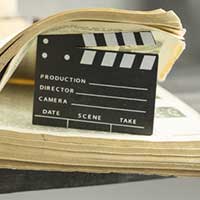 Some literary agents (and authors) are overly negative. They let their frustrations dribble (and sometimes spew) onto innocent and unsuspecting passersby.

This article is meant to be an antidote…

It contains good news. It clears up important misconceptions. And, it’s for authors of all genres–whether they believe their books have potential for Hollywood or not.

Reasons for Authors to Celebrate?

I’ve always loved theater, television, and movies. As much as books. Don’t judge. Story is story, and you can learn a lot about one industry by studying others. You’ll see what I mean in a moment.

Since my wife and I (and our two cats) moved to Beverly Hills in 2015, I’ve become more enamored with the movie industry–and I’ve met more people who are part of it: actors and actresses; agents, writers, and authors; directors and producers, studio executives, and other behind-the-scenes people responsible for major motion pictures and TV series.

Some of those people are my coaching clients.

You might be surprised that I get so geeked up about it, since I’ve been involved with the “entertainment industry” in varying capacities for most of my career. But I’m not one of those jaded, cynical, or negative types.

I’m having the time of my life doing this.

For example, during a recent breakfast with one of my coaching clients, Ron Cutler (I’ll be posting his success story soon), I was particularly excited. That’s because I helped him get represented by literary agent Susan Schulman. And I was excited because Ron has written screenplays and TV movies starring people like Julia Roberts, Keifer Sutherland, Ray Liotta, Forrest Whitaker, and more.

His latest script was just produced by Hallmark.

How cool is that?

As Ron was enjoying his blueberry pancakes at the Beverly Hills Hotel (my favorite place to take my clients because it’s just a mile from my house), we talked about the differences between the publishing and movie industries. A few weeks later, I got to talk shop with another movie industry insider who’s worked as an executive with major studios, and, more recently, helped aspiring screenwriters get agents, managers, and deals. During those meetings, I decided it was time to tell you some of what I’ve learned about some important differences between the publishing and movie industries.

In a good way…

5 Positive Things Authors Should Know: The Publishing Industry vs The Movie Industry

1. Most literary agents (90-95%) who represent authors, including top agents, accept unsolicited submissions. In other words, they actually want to see what you have, and you don’t need to know someone on this inside or have a referral to submit your work. That’s how most of my successful coaching clients (the majority of them previously unpublished) have been able to get agents. It’s not about referrals (click here to read my article about referrals).
.
Getting a good literary agent is primarily about having four other things:
.
.    1) A great pitch
.    2) A great book
.    3) A lot of persistence
.    4) A little luck
.
I can’t stress enough how fortunate authors are that the publishing industry works this way. The majority of agents and managers who represent screenwriters don’t accept unsolicited submissions. You can spend all day on the Internet and you won’t find a way to get your pitch to most of them.

2. Literary agents (for the most part) actually read queries and the books they’re thinking about representing. Some literary agents have interns, screeners, or readers who filter submissions. However, most literary agents don’t. That’s because most agencies aren’t huge companies with lots of staff. Plus, the majority of agents enjoy reading. They enjoy discovering the next big thing. And they’re worried an intern, screener, or reader might miss or pass on something good. It’s much more difficult to get screenwriter agents and managers to read your work.

3. Aspiring authors can live anywhere. Though the majority of publishers, as well as literary agents representing authors, live in NY, authors can live anywhere In the United States or abroad and be successful. Moving to NY isn’t going to significantly increase your odds of making it, unless you stalk agents or unwittingly sit next to one on the subway. Alternatively, if you’re hoping to become a screenwriter, you should consider moving to Hollywood. It’s no different than hoping to make it as an actor or actress. If you are, it’s obviously less likely to happen if you reside in Omaha, Nebraska. Not so as an author. You could live on Mars–though I’ve heard the email service is spotty and postage is expensive. 😉

4. There are approximately 700 literary agencies in the United States with more than 1,400 literary agents working at those agencies. Alternatively, there are only about 100 companies representing screenwriters. That makes sense, since millions of books (literally) are published each year. The majority of those books are self-published and sell an average of 82 copies. Those numbers aren’t typos. You can research them on Google. Not nearly as many movies are produced each year. In addition, books are much less expensive to produce.

It’s good to be an author.

5. Despite everything above, authors of books and original screenplays (insert joke about there being nothing original in Hollywood) can break through and be successful. If that wasn’t true, a lot of people–including me–would have to go into another line of work. The only way we can do what we do is have a predictably good “batting average” or success rate percentage for the work we do.
.
Success stories happen all the time.

For example, one author who registered for an Introductory Coaching Call with me, and then did more coaching after that, was querying book agents when he got a response from one who handles both books and scripts (there aren’t many agents like that). That agent declined the opportunity to pitch my client’s book to publishers, but…he asked permission to show it to movie studios!
.
I was thrilled, of course.

The author is more likely to get a movie deal now, in addition to a book deal. And, the fact that my client has an agent shopping his project in Hollywood now means it’s going to be easier for us to get another agent to shop his book around to publishers.

Did you know you can have more than one agent?
.
Click here to see my article called Literary Agent Menage a Trois.
.
And, if you want an agent to shop your book around Hollywood, stay tuned. I’m going to post another article soon, revealing the various ways you can make that happen. Like getting a book agent, I can’t guarantee you’re going to make it—nor can I say it’ll be easy—but there are things you can do to significantly increase your chances.

Click here if you want help to give yourself the best chance to get a top literary agent, publisher, and book deal. Register for an Introductory Coaching Call to get 1-on-1 feedback and improve your pitch material and/or writing.