Literary Agent Menage a Trois – Can You Have Two Book Agents? 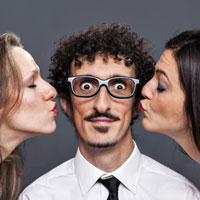 I recently spoke with an unpublished author who was unusual because she had two completed books (in two different genres) ready to pitch to agents.

Being the creative devil that I am, I proposed that she consider an unusual marketing strategy. I suggested she pitch both books at the same time, separately, to two different lists of literary agents.

And, of course, I wanted
to help her do it…

Now, don’t be nervous (or disappointed).

Maybe it’s something you’ll want
to experiment with…

What Are The Benefits of Having Two Agents?

Having more than one literary agent happens more often than you might think. Sometimes it happens out of necessity.

For example, you already have an agent. You decide to write a new book in a new genre and your agent isn’t interested in handling it. Your agent just doesn’t get it or doesn’t believe in it enough. Or maybe your agent doesn’t represent that genre and/or want to.

Or, you might be an unpublished author with two (or more) books in different genres. If that’s the case, I suggest you also consider using my multiple agent strategy. Not out of necessity, but to give yourself a competitive advantage.

Here are some of the benefits:

What Will Literary Agents Think About This Strategy?

After I shared this strategy with my prospective coaching client, she talked to an experienced copy editor about it… someone who’s been a copy editor for almost 20 years and writes reviews for a very prestigious book review company.

The copy editor had never heard of having different agents for different genres, so she contacted a couple literary agents she knows (one in LA and another one in NY) for clarification.

They said that they would never take on a client who had another agent concurrently pitching to publishers, and in fact, the author/agent contract with them would prevent them from doing just that.

The Fine Print – Having More Than One Agent

If you’re already represented by a literary agency for one or more of your books, you should always give that agent the first right of refusal when it comes to new projects. In fact, there’s a good chance that you are required to give your agent the first right of refusal. Read your author/agent agreement. Most agents include a clause that gives them the first option on anything you’ve ever written—or anything you write during the term of your author/agent contract.

In some cases, however, your agent might want you to get another agent for you other book(s). They might even beg you to get another agent. For example, one of your books might be in a genre that the agent doesn’t handle—or want to handle. Since that project won’t compete with the work(s) your current agent is handling for you, they’re not going to care. In most cases they’d rather have you working with someone else on instead of trying to convince them to shop it.

Why should you trust me?

“No, I’m really sorry. Even though we’ve made lots of money together on your gift books, I’m just not feeling it with your non-fiction how-to-make-quilting-fun title. But you’re certainly welcome to try and find another agent to rep it for you. Matter of fact, why don’t I give you a couple names so you can stop pestering me about it?”

But, I was thinking it!

Now… if you’re an unpublished author with books in multiple genres, and you use my strategy to try and get multiple agents, you have to do it right. In other words, make sure the agents you’re submitting to are only interested in ONE of your two genres.

Then, if a literary agent offers you representation for your mystery novel… at that point you’d want to disclose the fact that you also have a cookbook you’re shopping. If the agent doesn’t represent cookbooks, they’re not going to care. If you’re lucky, he or she might offer to represent your cookbook as well.

But, be warned, the agent will probably want to pitch the mystery first… and put the cookbook on the backburner for later (if/when your mystery sells). Are you starting to understand why it might be better to have two agents?

This is definitely an out-of-the-box strategy. It’s going to make some people uncomfortable (especially any literary agents reading this, because it levels the playing field a bit in favor of the author). But that’s the best part.

At least that’s how I see it.

What do you think?