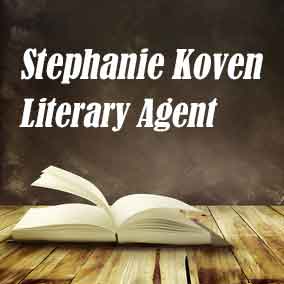 In 2008, Stephanie Koven Literary Agent joined Janklow & Nesbit Associates, representing authors writing in all genres in the US and international markets. She was interested in children’s books, fiction, and nonfiction.

Don’t submit a query letter to Stephanie Koven Literary Agent because she’s on our list of book agents who’ve stopped agenting, retired, or passed away. If you want to find book agents that ARE seeking new clients, click here now to access our Book Agents Directory. Or scroll below to learn more about Literary Agent Stephanie Koven and the Cullen Stanley International Agency.

Scroll below now to view representative titles and a complete profile for Stephanie Koven FREE in our Book Agents Directory.

Scroll below now to view the AAR status and a complete profile for Stephanie Koven FREE in our Book Agents Directory.

Scroll below now to view the email and postal address for Stephanie Koven FREE in our Book Agents Directory.

Join thousands of other subscribers today. Simply enter your first name and email address for free, instant access to the Directory of Literary Agents. Get complete access to comprehensive profiles for both established book agents and new literary agents like Stephanie Koven.