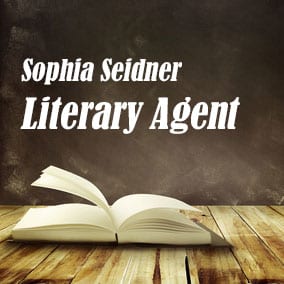 Sophia Seidner Literary Agent went on to work at the literary division of International Management Group as an assistant to the literary agent Julian Bach. After Julian’s retirement, she continued as an assistant agent, and contracts and subsidiary rights manager. Next Literary Agent Sophia Seidner moved to John Wiley & Sons, Inc. as an international rights manager for three years. There she focused on selling translation rights for Wiley’s extensive list of technology, business, and culinary titles.

Scroll below now to view representative titles and a complete profile for Sophia Seidner FREE in our Book Agents Directory.

Scroll below now to view the AAR status and a complete profile for Sophia Seidner FREE in our Book Agents Directory.

Scroll below now to view the email and postal address for Sophia Seidner FREE in our Book Agents Directory.

Want more information about Sophia Seidner? Join thousands of other subscribers today by entering your first name and email address. You’ll get free access to the Directory of Book Agents with detailed profiles for all book agents, including Sophia Seidner Literary Agent.