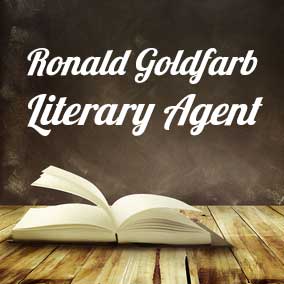 Ronald Goldfarb Literary Agent – This article about Literary Agent Ronald Goldfarb and Goldfarb & Associates is part of a series about literary agents and How to Find a Literary Agent. Publishing Agent Ronald Goldfarb is a new literary agent with and the founder of Goldfarb & Associates. Book Agent Ronald Goldfarb is also a Washington, D.C. author and attorney. He’s listed in Who’s Who In Law, Who’s Who In the United States, and other listings of prominent Americans, scholars, and writers. He studied at Syracuse University. Combining his last year of undergraduate work (BA 1954) with his first year of law school, he graduated (LLB) in 1956 and was one of the youngest to be admitted to the New York Bar that year. He continued his education at Yale Law School, where he earned Master’s (LLM, 1960), and Doctorate (JSD, 1962) degrees from Yale. He was later admitted to the California and District of Columbia and United States Supreme Court bars.

Literary Agent Ronald Goldfarb’s work at Yale Law School was interrupted when he accepted a commission and served three years in the United States Air Force JAG, where he prosecuted and defended numerous courts-martial cases from AWOL, to murder, and desertion (capital offenses).

Scroll below now to view representative titles and a complete profile for Ronald Goldfarb FREE in our Book Agents Directory.

Scroll below now to view the AAR status and a complete profile for on Ronald Goldfarb FREE in our Book Agents Directory.

Scroll below now to view the email and postal address for Ronald Goldfarb FREE in our Book Agents Directory.

Join thousands of other subscribers today. Simply enter your first name and email address for free, instant access to the Directory of Literary Agents. Get complete access to comprehensive profiles for both established book agents and new literary agents like Ronald Goldfarb Literary Agent.