A Lesson About Publishing—from My Cat

Home » Literary Agent Blog » A Lesson About Publishing—from My Cat

A few weeks ago, one of my two Siamese cats (Fudge) taught me a lesson. It was completely unexpected, and that made the experience much more impactful. Now I’m sharing what happened, as I hope it will have a positive effect on you as well.

In other words, think of this article
as a guest post from my cat.

But it might help you reach
your goals as an author.

My wife and I adopted Fudge and his sister Ginger from a shelter in 2002 when they were just seven weeks old. Ingrid and I had been married about one year and she had just come down with a debilitating medical condition. Long story short, Ingrid suddenly—without any signs or warning—could no longer walk, see, or speak.

It was the beginning of four years or so of hell and healing that started with a trip to the emergency room and two weeks in the hospital. The doctors disagreed (they still do) about what happened. They also disagreed about the best way to fix it.

As a result, Ingrid spent approximately two torturous years in the dark, unable to move. When she closed her eyes, her world would spin into a nauseating death spiral. When she opened her eyes, it was only slightly better. Ingrid had to keep her eyes fixed on a single spot on the wall. Otherwise, the spinning would start again. Ingrid couldn’t read, watch TV, or talk. She had no energy, and she kept slurring her words.

We wondered if Ingrid was going to be a cripple for the rest of her life—or worse—like her doctor suggested. He said Ingrid might have multiple sclerosis. He also said she might spend the rest of her life blind, deaf, and in a wheelchair. It was surreal. Even more so, because Ingrid’s doctor was seven feet tall, emaciated, and looked like he’d had a stroke at some point. Half his face didn’t move when he shared his gloomy prognosis.

I felt like Ingrid and I were unlucky
characters in a depressing
movie or novel.

Long story short, it took four years of patience, persistence, and positive thinking (and possibly divine intervention if you want to go there) for Ingrid to get better.

The presence of our two cats
also played a huge role
in Ingrid’s recovery.

After I brought Ingrid home from the hospital, I thought about getting a couple cats. I’d never had a cat before, but I knew Ingrid was going to need something—or someone—to keep her company and help her heal. I was working for the publisher Blue Mountain Arts at the time, so I was away from the house a lot. I couldn’t afford to take more time off work.

Ginger and Fudge were just tiny, soft, warm balls of fur when we got them—but their loving and healing energy was immense. Our babies were gigantic orbs of light. Fluffy, long-haired Ginger with her white fur and big blue eyes. And short-haired but equally adorable Fudge with chocolate-colored fur and not-so-big blue eyes (a bit cross-eyed).

Ginger would play with my feet in bed. She’d also gaze blissfully around the room like she was seeing angels. And, unlike most cats, Ginger purrs if you pull her tail. Ginger is also unusual in that she likes being held in odd positions, include awkward and upside-down positions. And she likes to eat absolutely everything: fruit, vegetables, you name it. 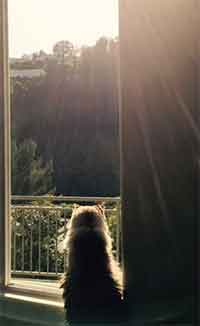 One of Fudge’s earliest habits was crawling under the covers to snuggle with me at night. When he wasn’t under the covers, he enjoyed being swaddled in a blanket with just his nose and ears poking out. And he’d huff and puff in the morning until he got his food, rushing up the stairs so fast that he’d often slip and trip.

He’s one of the coolest
cats I’ve ever known. 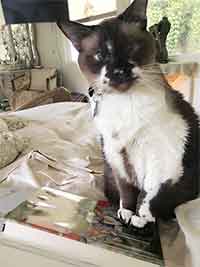 I can’t begin to express how much joy our cats have brought us over the years. Since Ingrid and I tried to have children, but weren’t able to, Ginger and Fudge have taken an even bigger place in our lives and hearts.

A few weeks ago, Ingrid’s mother Kerstie was visiting from Sweden. It was a Sunday evening and we were all getting ready for bed. Ingrid was in the master bathroom with Kerstie. I was holding Fudge in my lap, looking deep into his cross-eyed baby blues. Then I burrowed my face deep into his buddha belly. That’s another unusual thing about Fudge. I don’t know many cats trusting enough to make themselves vulnerable that way and let you do that.

The next morning, I was in my home office when Ingrid told me I needed to come look at Fudge. He was near his food and water bowl, lying in an awkward position. His legs were pointing in an unnatural direction, like they’d been broken. He was trying to stand up, but he was unable to. My heart sank, then it jumped up into my throat.

I picked Fudge up immediately, sat in a chair with my legs together, and laid him in my lap. I then started touching him carefully, massaging him, and moving his legs to see if anything was broken. Seemed he was okay, but he was “out of it.” Maybe just sick, or maybe he’d eaten something he wasn’t supposed to.

Ingrid drove Fudge to the vet.

Less than 24 hours later—without anysigns or warning—the doctor told us our baby boy’s body was filled with two massive tumors. The doctor also said Fudge was probably suffering. A lot. Less than 48 hours later, Ingrid and I were holding Fudge in our arms again. As he was being put to sleep. It was absolutely heartbreaking. I’m sobbing as I write this. 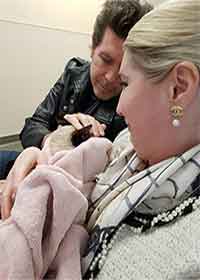 We didn’t have time to plan—or act.

It was just over.

Maybe that’s a blessing,
though it didn’t feel like it.

Ingrid and I would do anything to have a couple more days, weeks, months, or years with Fudge. Well, actually, not anything. The doctor said we could have kept Fudge alive for a few more weeks or months, with lots of blood transfusions and chemotherapy. But the doctor also said Fudge would have been miserable with no quality of life.

So, instead, we held Fudge in our arms while he was still aware: able to see us, smell us, and, most important—able to feel our love and how much he meant to us.

I know you know that life is short.

You don’t need me to tell you that, as I’m sure you’ve already experienced and grieved great challenges and losses of your own.

I wrote this article because, though I know you know that life is short, I also know that we all need reminders of that fact. We get complacent and distracted and lose sight—at least to some extent—of what matters most. That is, our relationships and big dreams that, hopefully, make our lives more worth living.

In your case, that means making sure you’re not avoiding writing—or avoiding taking the steps you need to take to share your writing with the world.

To help you do just that, read this other article
I wrote in 2013 called Publish Your Book.

It’s the perfect companion piece to this article and (what are the odds?) it also talks about Fudge and cancer, though not in the same sentence. You know what they say, truth is sometimes stranger than fiction.

In the early days after Fudge passed, I had a moment during which I found myself with an hour of free time during a workday. That hardly ever happens. But, that day, I’d finished the things I had planned earlier than expected. As I wondered what to do next, I thought about Fudge. I was so sad that I felt I should do something to try and bring myself joy. Or, at least, to help take my mind off the hurt and gaping hole in my life.

That’s when I remembered a new website for authors that I’d been thinking about creating for more than a year. Now I’m a third of the way done with it. It will be a while before the site is done, but I’m chipping away at it. And, every time I look at it, I think about Fudge. So, working on the new site (in between my other responsibilities) is somehow, oddly, turning out to be somewhat therapeutic.

I’m also trying to be gentler and kinder and more patient with myself…and every other person and being in my orbit. That’s something I always try to do, but losing our baby boy has softened me that way as well. And, of course, I hope this article has a positive impact on YOU somehow as well. I hope me sharing the story of Fudge’s life and love helps kindle your commitment to everyone and everything that matters most to you.

If you want to send me a message, please post your question or comment here on the FAQ page of my website (don’t send it via email).