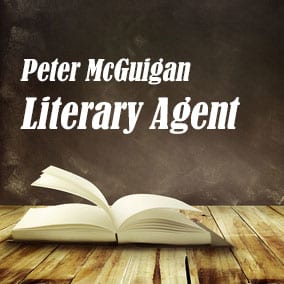 After half a decade working in corporate publishing, Peter McGuigan Literary Agent found he was an independent at hear and moved to Sanford J. Greenburger Associates. There he began to develop his own client list of diverse authors and worked with international bestsellers, such as: Nicholas Sparks and Dan Brown.

Literary Agent Peter McGuigan and his business partner, Yfat Reiss Gendell launched Foundry Literary + Media. There, he created a large, independent agency that became known for high-quality bestsellers. Dewey, The Monuments Men, Dopesick, Trevor Noah’s Born A Crime, Cassandra Peterson’s Yours Cruelly, Elvira—these projects were not only massively successful around the world, they were developed from scratch by him, the author, and their team. Foundry’s thirteen year run, including massive bestsellers from Jenn Sincero, Mark Manson, Trevor Noah and others, set a high bar for independent, internationally-focused book publishing. He also became a producer of TV and film, with credits appearing in Dopesick, Stronger, Searching for Neverland and many other projects.

With almost three decades in the book publishing business, Peter McGuigan Literary Agent has seen the industry—and the agent’s role in it—evolve over the course of his career. “I am not interested in documenting popular culture,” he says. “I want to create popular culture.”

Scroll below now to view representative titles and a complete profile for Peter McGuigan FREE in our Book Agents Directory.

Scroll below now to view the AAR status and a complete profile for Peter McGuigan FREE in our Book Agents Directory.

Scroll below now to view the email and postal address for Peter McGuigan FREE in our Book Agents Directory.

Join thousands of other subscribers today. Simply enter your first name and email address for free, instant access to the Directory of Literary Agents. Get complete access to comprehensive profiles for both established book agents and new literary agents like Peter McGuigan Literary Agent.