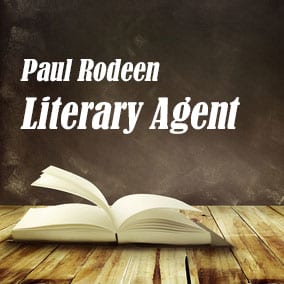 Paul Rodeen Literary Agent’s first job in New York was with the highly respected literary agency Sterling Lord Literistic, Incorporated. He was an assistant to Jody Hotchkiss, a film agent with the agency at the time. After months of reading and evaluating scripts, Paul was offered a position in the children’s book division of Sterling Lord Literistic, Inc. as an assistant to George Nicholson, the legendary children’s book publisher turned literary agent. In 2004, Literary Agent Paul Rodeen moved back to his home state of Illinois where he opened up a small satellite office in Chicago for Sterling Lord Literistic, Incorporated. Between 2004 and 2008, he grew his list of clients to include over a dozen talented writers and illustrators of picture books, middle grade novels, and young adult fiction. This group of talented artists became the backbone of what would become Rodeen Literary Management.

Scroll below now to view representative titles and a complete profile for Paul Rodeen FREE in our Book Agents Directory.

Scroll below now to view the AAR status and a complete profile for Paul Rodeen FREE in our Book Agents Directory.

Scroll below now to view the email and postal address for Paul Rodeen FREE in our Book Agents Directory.

Want more information about Paul Rodeen? Join thousands of other subscribers today by entering your first name and email address. You’ll get free access to the Directory of Book Agents with detailed profiles for all book agents, including Paul Rodeen.