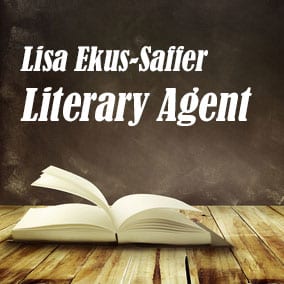 Lisa Ekus-Saffer Literary Agent – This article about Literary Agent Lisa Ekus-Saffer and The Lisa Ekus Group is part of a series about literary agents and how to Find a Publishing Agent. Publishing Agent Lisa Ekus-Saffer is an agent with The Lisa Ekus Group.  Literary Agent Lisa Ekus-Saffer’s literary career started with her internship at the Jean V. Naggar Literary Agency in New York (while a student at Barnard College), followed by several publicity positions at leading publishers, including Random House and Crown Publishers. But really, it started before then, as she cooked with her mother, creating meals and family memories around food (experience she later put to use when preparing three meals a day for more than 120 people in a kibbutz in Israel). Then came the cookbooks. And more cookbooks. By the time Lisa moved with her family to Hatfield, Massachusetts, she had amassed towering boxes of books, enough to later create a two-floor library that now boasts approximately 10,000 books, about 7,000 of which are – you guessed it – cookbooks.

Lisa Ekus-Saffer Literary Agent is a quintessential entrepreneur who knows a thing or two about ingredients. Hailed as the “best in the business” by the New York Times, she is someone who not just created a business, but invented a category. In 1982, she started the first public relations agency devoted to publicizing cookbooks, chefs, and food products. As a March 25, 1998 article in the Springfield, Massachusetts Union-News stated: “It was like discovering she was on a surfboard on the biggest wave of the ’80s, and she’s ridden its towering crest ever since.” In 2000, Lisa Ekus Public Relations began Literary Agenting services and has since negotiated more than 300 book deals with such publishers as Andrews McMeel, Artisan, Chronicle, HarperCollins, Penguin, Robert Rose, Simon & Schuster, Sterling, Taunton, Ten Speed Press, Wiley, and numerous others. The last decade has seen expanded media training services, increased culinary partnerships and spokesperson opportunities, new public relations campaigns, publishing consulting, and an ever-expanding literary agenting practice. And, to reflect all this growth, the company changed its name in 2007 to The Lisa Ekus Group.

Lisa Ekus-Saffer Literary Agent has been regularly interviewed by the media, was given awards by the International Association of Culinary Professionals (IACP) and the American Marketing Association, and has been a board member of Women Chefs & Restaurateurs, IACP, and The Food Bank of Western Massachusetts, as well as being a top fundraiser for the Leukemia and Lymphoma Society.

Scroll below now to view representative titles and a complete profile for Lisa Ekus-Saffer FREE in our Book Agents Directory.

Scroll below now to view the AAR status and a complete profile for Lisa Ekus-Saffer FREE in our Book Agents Directory.

Scroll below now to view the email and postal address for Lisa Ekus-Saffer FREE in our Book Agents Directory.

Want more information about Lisa Ekus-Saffer? Join thousands of other subscribers today by entering your first name and email address. You’ll get free access to the Directory of Book Agents with detailed profiles for all book agents, including Lisa Ekus-Saffer Literary Agent.