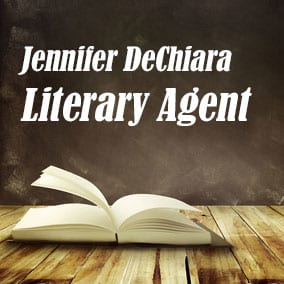 Jennifer DeChiara Literary Agent is a frequent guest lecturer on publishing and the art of writing at universities and writers conferences throughout the country, which have included New York University’s Summer Publishing Institute, the Penticton, Canada Writers Conference, the San Diego State University Writers Conference, Backspace, the International Women’s Writing Guild, and the Learning Annex.

The agency has a strong presence in Hollywood and is affiliated with many of the top film agencies there, with many film and television projects in development, several of which Literary Agent Jennifer DeChiara has created and/or co-produced.

Scroll below now to view representative titles and a complete profile for Jennifer DeChiara FREE in our Book Agents Directory.

Scroll below now to view the AAR status and a complete profile for Jennifer DeChiara FREE in our Book Agents Directory.

Scroll below now to view the email and postal address for Jennifer DeChiara FREE in our Book Agents Directory.

Want more information about Jennifer DeChiara? Join thousands of other subscribers today by entering your first name and email address. You’ll get free access to the Directory of Book Agents with detailed profiles for all book agents, including Jennifer DeChiara Literary Agent.