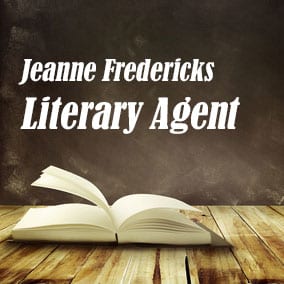 Jeanne Fredericks Literary Agent was the first managing editor of Macmillan Publishing’s Trade Division. She was then editorial director of Ziff-Davis Books where she managed five book clubs and an in-house list of special interest books. Before entering publishing at Basic Books/Harper & Row, she earned a certificate from Radcliffe Publishing Procedures Course. Literary Agent Jeanne Fredericks has been on the faculty at the Harvard Medical School CME Writers Conference, a featured speaker at the National League of American Pen Women’s Conference in Williamsburg, Virginia, a panelist at the James River Writers Conference and Connecticut Press Club’s Biennial Writers Conference, and a speaker and panelist at the Mount Holyoke Writer-Editor Conference. Publishing Agent Jeanne Fredericks is a member of AAR and Authors Guild. She is listed in Who’s Who and profiled in Jeff Herman’s Guide to Book Publishers, Editors & Literary Agents and other references for authors.

Scroll below now to view representative titles and a complete profile for Jeanne Fredericks FREE in our Book Agents Directory.

Scroll below now to view the AAR status and a complete profile for Jeanne Fredericks FREE in our Book Agents Directory.

Scroll below now to view the email and postal address for Jeanne Fredericks FREE in our Book Agents Directory.

Want more information about Jeanne Fredericks? Join thousands of other subscribers today by entering your first name and email address. You’ll get free access to the Directory of Book Agents with detailed profiles for all book agents, including Jeanne Fredericks.