How to Become a Bestselling Author – For Any Book Genre 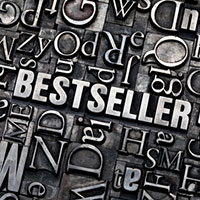 How to Become a Bestselling Author – As a former literary agency owner (now an author coach and consultant) I know that most authors spend plenty of time writing, and thinking about How to Get a Literary Agent.

This article is about something else, and it’s arguably one of the most important things you will need to become bestselling author.

Scroll below now to find out what it is.

How to Become a Bestselling Author –
The Secret Sauce

I don’t know about your family,
but mine is crazy.

None of my relatives (that I know about) are institutionalized, but that doesn’t mean they shouldn’t be. And the fact that I grew up with some of those people is going to help you become a bestselling author.

In spite of the drama I was surrounded by growing up (you probably wouldn’t believe me if I told you everything), I had one thing going for me. From the moment I was conceived (yes, in the womb) I had people around me saying:

* You have a big purpose.

* You can do absolutely anything.

* You’re going to be an influential leader.

I got this constant “programming” primarily from my mother. But I also heard it during sermons at the church she dragged me to every weekend. And I heard it consistently from people who attended that church. When you’re a child and people in authority who are “older and wiser” than you say those things, with conviction, again and again, you start to believe them.

At least I did.

I ate it up like an orphan
at his first Thanksgiving dinner.

It didn’t matter that everyone’s words were based completely on potential and possibility. Blind hope or belief. Air, basically. You might even say that the people saying those things were delusional.

Except for one little detail…

That’s one of the reasons authors are drawn to write. That’s also why I’m so careful about the words I use with you. Whether you think you’re “sensitive” or not, you are.

How to Become a Bestselling Author – Your Mindset

Here are three things you need to remember if you want to know how to become a bestselling author. These three things will sound simple, but they’re extremely difficult to consistently implement. So, don’t just nod your head and tell yourself that you already know these things. That’s not the same thing as doing them, doing them right, and doing them each moment.

1) Be careful who you allow into your space.
Be honest with yourself about any losers you’ve allowed into your life—people that are too negative,  always taking more than they give (even if it’s just energetically). I’m not obligated to ANYONE in my life unless they’ve earned it. What about you? I don’t care if someone is my blood or we have history; if they don’t treat me with respect, I’m out of there. Don’t spend time with people who don’t appreciate your positive spirit.

2) Be careful who you speak with about your books.
You might be a strong person, but everyone’s creative space is fragile. When you’re creating anything in this world, you build confidence as you go. If you talk to people during that time who are negative, skeptical, or don’t know what they’re talking about, it can mess with your head. And your work can suffer.

3) Be careful with the voices in your head.
It’s equally important that you pay attention to your own inner critic and skeptic. Keep him on a short leash. You’ll never get rid of him completely, so that shouldn’t be your goal (you’ll feel like a failure every time he comes around talking trash). What you can do, however, is kick him out of the main house in your head… and move him in to the “guest house.” You know, that little property on the far side of your mental space. You’ll still see him from time to time, but only briefly.

How to Become a Bestselling Author – Conclusion

When was the last time
someone told you:

* You have a big purpose.

* You can do absolutely anything.

* You are (or you’re going to be) an influential leader.

I hope it was today, or yesterday, or just a few days ago. But I also know that you’re probably surrounded by people (especially on social media) who spend way too much time being rude, nasty, or downright depressing… under the pretense of being “real.” To those people I say balance your generous portions of “truth” with a decent sized helping of good manners.

And a dash of hope.

No matter what people say, always remember that
getting published isn’t luck, it’s a decision.

If you
believe it.

If you liked this article about how to become a bestselling author,
click here to read a related article I published a while ago
called Suspension of Disbelief.

And post any comments or questions
you have for me below.