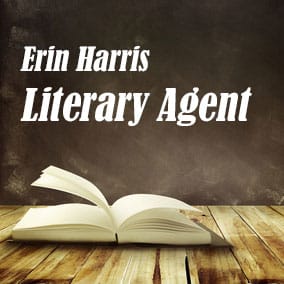 Erin Harris Literary Agent – This article about Literary Agent Erin Harris and Folio Literary Management is part of a series about literary agents and Finding a Book Agent. Publishing Agent Erin Harris is an agent with Folio Literary Management. She is also the Vice President of the agency. Book Agent Erin Harris attended Trinity College (Hartford, CT), where she graduated Phi Beta Kappa in 2007 and was named Presidential Fellow of the English Department. Her publishing career started that same year when she interned for the literary agent William Clark of WM Clark Associates. In 2008, she joined the Irene Skolnick Literary Agency, where she first experienced the thrill of advocating for books she believed in and writers she admired. She worked there for four and a half years, representing her own projects and selling subsidiary rights on behalf of the agency.

Early on, it became apparent to Erin Harris Literary Agent that there was a need for agents who could think like writers. She’d studied literature in college, but she was eager to hone her creative and editorial skills. This desire led her to pursue an MFA in Creative Writing at The New School. There she studied fiction and non-fiction with Susan Cheever, Sigrid Nunez, Ann Hood, and James Lasdun. She now see herself as a kind of interpreter, an agent conversant in both the language of the writer and the language of the industry, whose job it is to help you navigate publishing’s shifting landscape.

Erin Harris Literary Agent loves to champion the careers of debut authors. Outside of the office, she’s an active participant in New York’s literary community. She’s a member of PEN American Center and Women’s Media Group, as well as a founder and host of H.I.P. Reading Series.

Scroll below now to view representative titles and a complete profile for Erin Harris FREE in our Book Agents Directory.

Scroll below now to view the AAR status and a complete profile for Erin Harris FREE in our Book Agents Directory.

Scroll below now to view the email and postal address for Erin Harris FREE in our Book Agents Directory.

Want more information about Erin Harris? Join thousands of other subscribers today by entering your first name and email address. You’ll get free access to the Directory of Book Agents with detailed profiles for all book agents, including Erin Harris Literary Agent.