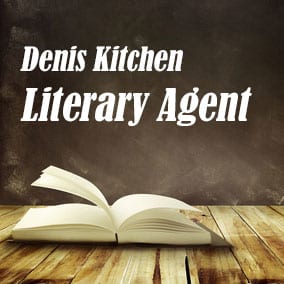 Denis Kitchen Literary Agent was a literary agent with Denis Kitchen Publishing Co. He is no longer taking submissions. Publishing Agent Denis Kitchen was an agent with Denis Kitchen Publishing Co. Book Agent Denis Kitchen (1946-) was an original member of the “Underground Comix” movement in the late 60s and 70s, well-known as the founder and publisher of the pioneering publishing house Kitchen Sink Press BarnKitchen Sink Press (1969-99). He founded the Comic Book Legal Defense Fund (1986-), was the author or co-author of several books, an art and literary agent, a longtime editor, and a curator of comic art exhibitions in America and overseas. A monograph of Kitchen’s artistic career, The Oddly Compelling Art of Denis Kitchen, was published by Dark Horse in 2010. With partner John Lind he created the Kitchen Sink Books imprint in partnership with Dark Horse Comics in 2013. He was elected to the Will Eisner Hall of Fame in San Diego in 2015.

Literary Agent Denis Kitchen illustrated, wrote, and self-published and hawked an irreverent mimeo zine called Kleptomaniac while still in grade school, continuing it for twenty-five issues as Klepto into high school. (William Horlick H.S., Racine WI). Despite its irreverence, Horlick gave him a Distinguished Graduate Award in 2017. The creative and entrepreneurial experience proved addictive. At the University of Wisconsin—Milwaukee (UWM) in 1967, he co-founded Snide, the campus’s first humor magazine, and also drew a weekly strip, “Sheepshead U,” for the UWM Post while majoring in Journalism. After graduation and a brief army stint, his professional cartooning career began (1968), when he created and self-published Mom’s Homemade Comics #1 during the tumult of a burgeoning counterculture. The publication of Mom’s #1 coincided with the birth of the underground comix movement and Kitchen quickly networked with like-minded colleagues in the west coast and Midwest.

Scroll below now to view representative titles and a complete profile for Denis Kitchen FREE in our Book Agents Directory.

Scroll below now to view the AAR status and a complete profile for Denis Kitchen FREE in our Book Agents Directory.

Scroll below now to view the email and postal address for Denis Kitchen FREE in our Book Agents Directory.

Want more information about Denis Kitchen? Join thousands of other subscribers today by entering your first name and email address. You’ll get free access to the Directory of Book Agents with detailed profiles for all book agents, including Denis Kitchen.