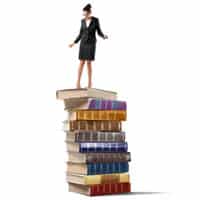 In Author Platform – Part 1 I explained that most authors make the mistake of focusing too much on their book when trying to get a book deal. You also have to sell “you.” I revealed the two different parts of an author platform: 1) Credibility, and 2) “Sales” Ability. And I explained how to get more credibility. This article explains what “Sales” Ability is and shows you how to improve yours.

Scroll below to learn more or click on the link above
to read part 1 of this 2-part series.

“Sales” Ability is simply your ability to help your future publisher sell books. I know, every author wants to believe that selling books is the publisher’s job.

There are many ways that you can sell books, and they don’t necessarily involve you being (or acting like) a salesperson. Yes, you can “sell” books without being “salesy,” embarrassing yourself, or even leaving your house.

Yes, “hard selling” strategies like that can be effective – and agents/publishers will love you for doing it – but that not the only way to sell books.

The most important part of “Sales” Ability is visibility.

Speaking of all these people you have access to, what kind of people are they? Are they readers that will only buy one book? Or, are they influencers who can inspire/motivate lots of other people to buy your book? Obviously, both types are better than one.

What communities, associations, and organizations are you a part of – online and offline? And, what are you doing each month to get in front of more eyeballs?

Now, here’s something important you need to know…

There are three types of visibility (from better to worse). Again, not all visibility is created equal.

This type of visibility translates to surefire book sales. It’s all about concrete details for things that are usually already done. As such, they will light a fire under agents and publishers when you reveal them. Details don’t lie. Examples include: testimonials already secured by celebrities, famous authors, or other influential people; firm commitments (sometimes in writing) from influential people to help promote your book to their audience when the time is right;  you having a massive mailing list or social media following; you having a website and/or blog with massive traffic and/or comments (with the numbers to prove it); your own radio show, TV show, or syndicated column; past and upcoming media appearances; past and upcoming speaking engagements in front of lots of people; pre-sale commitments from corporations or organizations; having your own publicist or being able/willing to hire one.

This type of visibility isn’t as hot as fire (above), but it’s better than just smoke (below). Examples include: potential testimonials from celebrities, famous authors, or other influential people that you met once or have some type of connection to; potential commitments from influential people to help promote your book to their audience; a modest mailing list or social media following; a website and/or blog with modest traffic and/or comments; potential for your own radio show, TV show, or syndicated column; potential media appearances; potential speaking engagements in front of lots of people; a willingness to hire your own publicist for your book launch.

This type of visibility is better than nothing, but not much. It’s simply about your communicating your understanding of the need for visibility… and your willingness to “do whatever it takes to create it.” Examples include: a plan to later approach celebrities, famous authors, or other influential people to try and get testimonials; a plan to later try and get commitments from influential people to help promote your book to their audience; a plan to build a mailing list, social media following, website and/or blog; a plan to later have your own radio show, TV show, or syndicated column; a plan to set up media appearances and speaking engagements.

Top literary agents have fantastic bullsh*t detectors. They’re like top lawyers, so you can’t just say, “I’m willing to do whatever it will take to make my book successful.” When it comes to visibility, you need to follow one of the most famous rules in writing:

So, if you want to improve your visibility, there are three things you can do:

You don’t need to be an extrovert to help sell books. But you do need to do something, and position yourself in the best way possible.

Like this article? Post a comment or question below… and share this article by using the floating Sharebar to the left! For more information about improving your author platform and/or getting published, click here to read my free 15-part Guide to Finding a Literary Agent. Then click here to see the 3 different ways you can get 1-on-1 help from me (free to fee) as your Book Marketing Coach. You can ask me questions about improving your author platform or getting published on my blog, or via phone or Skype during an introductory consulting call.