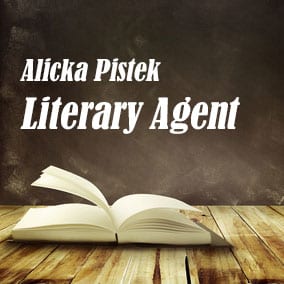 Alicka Pistek Literary Agent began her agenting career in the foreign rights department at ICM, where she worked with such distinguished authors as Richard Ford, Jay McInerney and Haruki Murakami. Within two years, she was appointed Director of Foreign Rights and Agent at Nicholas Ellison, Inc. In addition to domestic agenting, she sold and managed international rights for New York Times bestseller Nelson DeMille and writers Olivia Goldsmith and Carol Higgins Clark.

Scroll below now to view representative titles and a complete profile for Alicka Pistek FREE in our Book Agents Directory.

Scroll below now to view the AAR status and a complete profile for Alicka Pistek FREE in our Book Agents Directory.

Scroll below now to view the email and postal address for Alicka Pistek FREE in our Book Agents Directory.

Join thousands of other subscribers today. Simply enter your first name and email address for free, instant access to the Directory of Literary Agents. Get complete access to comprehensive profiles for both established book agents and new literary agents like Alicka Pistek Literary Agent.