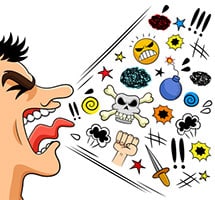 Recently, in a group I’m in on Facebook, someone brought up the topic of personal religious beliefs and swearing in writing based on a person’s moral standards. Being a Christian myself, I chimed in on the discussion, explaining the only way an author would be swearing, and that it’s separate from that of a character.

One must understand that the only time the author would be swearing in fiction would be in the narration. The only way there should ever be swearing in narration is if it is from the point of view of a character who is prone to that kind of behavior.

Swearing in dialogue is the character swearing, not the author. The reason characters swear is to make them seem like real people. Real people swear. For example, if a character is a drug dealer, the character would have to swear or they would be unbelievable to the reader. Or, there might be brief measure of swearing by a character when they’re startled or afraid. Even if you were writing a pious character, something along the lines of a swear word might slip out of their mouth when something happens that warrants it. This makes them human, because even human beings with the best intentions make mistakes.

To force your personal beliefs onto every character you write is impossible and wrong. Each character should take on its own personality and they should have a different background (usually) than the author. If not, the author’s characters would be bland and boring. Life is diverse. Writing life calls for diversity in characters, beliefs, and actions. You can’t live is a tiny little box of your own right and wrong and write something that’s going to touch people. If that’s your goal, you need to switch to nonfiction – you’ll be better off there.

There’s also another aspect to the swear word issue that gets complicated in the “swearing” area: culture. What is a swear word in one culture isn’t necessarily a swear word in another. All words are words, and your cultural-base decides which words are “bad” words. So…no words are really bad. What makes a word bad (or a swear word) is the implied and perceived meaning of that word to the people of different cultures. If you think about it that way, no words are bad or swear words. That puts an entirely new spin on the issue, doesn’t it?

Personally, I do include moderate swearing in my writing – in character dialogue. Swearing happens whether people want it to or not, so use it where it’s appropriate and moderate the rest. Let’s all be human – authors and characters – unless, of course, you’re writing aliens.

If you’d like to try Becca’s novel, Nurse Blood, the Kindle edition is on sale for Halloween (Oct. 28th-31st).

If you liked this guest post by Becca Besser, check out this
other one she wrote called Sensitive Author Syndrome.

BECCA BESSER has been published over 200 times in magazines, ezines, anthologies, literary journals (poetry & photography), nonfiction collections, and on blogs. Undead Drive-Thru, her first zombie novella, has been compared to the works of Stephen King and The Texas Chainsaw Massacre. An anthology which Becca edited and has a short story in, Earth’s End, won the Turning Pages Book of the Year 2012 Reader’s Choice Award in the Scifi category. Becca has also edited nearly a dozen books as a professional editor, and she’s currently shopping her first full-length thriller/horror novel called Nurse Blood. Learn more at www.rebeccabesser.com and check out Becca’s blog at https://rebeccabesser.wordpress.com.