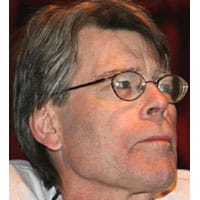 Scroll below to find out who Stephen King’s literary agent is and get free access to the world’s most comprehensive Directory of Literary Agents.

You can also click here to see our top Literary Agent Search Results.

Photo of Stephen King by Pinguino

Who Is Stephen King’s Literary Agent?

Stephen King sold his first short story in 1967. Throughout the early years after college he sold stories to men’s magazines. Many of these were later gathered into the Night Shift collection. In 1971, Stephen began teaching high school English classes. Writing in the evenings and on the weekends, he continued to produce short stories and to work on novels.

In 1973, Doubleday accepted the novel Carrie for publication. A short time later Stephen learned that a major paperback sale would provide him with the means to leave teaching and write full-time. That same year Stephen wrote The Shining.

The Kings have three children: Naomi Rachel, Joe Hill, and Owen Phillip. Stephen is of Scots-Irish ancestry, stands 6’4″ and weighs about 200 pounds. He sometimes wears a beard between the end of the World Series and the opening of baseball spring training in Florida. He has worn glasses since he was a child. Stephen and his wife Tabitha provide scholarships for local students and contribute to many charities.

Joyland set in a small-town North Carolina amusement park in 1973, the story of the summer in which a college student comes to work as a carny and confronts the legacy of a vicious murder, the fate of a dying child, and the ways both will change his life forever, to Charles Ardai at Hard Case Crime by Stephen King’s book agent Chuck Verrill at Darhansoff & Verrill.

Stephen King and Stewart O’Nan’s A Face In the Crowd about a grieving widower who sees faces from his past in the stands at a baseball game, to Scribner, and to Hodder & Stoughton in the UK, for publication as an ebook original, by Chuck Verrill at Darhansoff & Verrill.

Find contact information for Stephen King’s literary agent and every other book agent in our free Free Directory of Literary Agents.