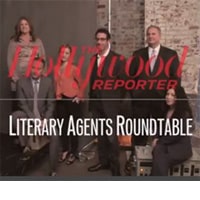 Literary Agents Roundtable Interview with The Hollywood Reporter – Thanks to Dale Eldon for turning me on to this 1-hour interview a while back with Jodi Reamer (Writers House), Kim Witherspoon (Inkwell Management), Robert Gottlieb (Trident Media), Sloan Harris (ICM), Eric Simonoff (WME), and Christy Fletcher (Fletcher & Company). I’ve participated in many literary agent panel discussions like this, but I’ve never gotten one on video. So I thought you might appreciate seeing this one. It features some of the top literary agents in the industry today.

Scroll below to watch now…

Also, if you want to learn more about these literary agents or find out how to submit your work to them, click here to enter my Directory of Literary Agents. It is the world’s most comprehensive (and accurate) literary agent directory, and it’s free to access.

Some of the things you’ll discover:

Jodi Reamer (Writers House): Jodi is Stephenie Meyer’s agent and she’s an attorney. She’s been with Writers House for 15 years. Jodi handles both children’s books, from young-adult to picture books, and adult books. Her focus is commercial fiction and she would love to represent a legal thriller.

Kim Witherspoon (Inkwell Management): At age 26, Kimberly founded her own literary agency, which quickly became one of the most prestigious and successful agencies in Manhattan, with clients who are frequently published around the world. Over the past 15 years, she has represented critically acclaimed and bestselling authors of both fiction and nonfiction.

Robert Gottlieb (Trident Media): After getting started in the mailroom in 1977, Gottlieb became a department assistant in WMA’s literary department and shortly thereafter began working with the head of the department, Owen Laster. Five years later he became a literary agent, discovered Tom Clancy in the early eighties, and in 1989 was promoted to Senior Vice President, becoming one of the youngest agents to ever head the WMA Literary Department. He was then elected to the Board of Directors and became Executive Vice President in 1992. After 24 years at the William Morris Agency, Gottlieb started Trident Media Group, LLC in September 2000 where he now serves as Chairman. Robert Gottlieb presently represents many best-selling authors.

Sloan Harris (International Creative Management – ICM): Sloan is the co-head of publications at ICM, which in Variety’s words “essentially establishes him as heir apparent to run the agency’s Gotham-based powerhouse book operation in the years to come.”

Eric Simonoff (William Morris Endeavor – WME): Eric graduated from Princeton University in 1989, with a degree in Classics. He began his publishing career at W.W. Norton as an editorial assistant. He joined Janklow and Nesbit 1991 and rose to co-director. He left Janklow & Nesbit for William Morris Endeavor in 2009. His switch in agencies was considered a major event in the publishing industry. He represents three Pulitzer Prize winners, as well as over a dozen New York Times bestselling authors.

Christy Fletcher (Fletcher & Company): Christy began her career at the Carol Mann Agency. After three years, she left to help start Carlisle & Company (now part of Inkwell Management) where she continued to build a strong list of bestselling and award-winning writers. In 2003, Christy left to co-found Fletcher & Parry. She launched the agency’s move into feature film and television production and management in 2006, and acts as producer on several client-based projects.

To learn more about these literary agents or submit your book to them click here to access my Literary Agent Directory. It’s the most comprehensive (and accurate) literary agent directory in the world, and it’s free to access.

I want to know what you think, so share your thoughts below!