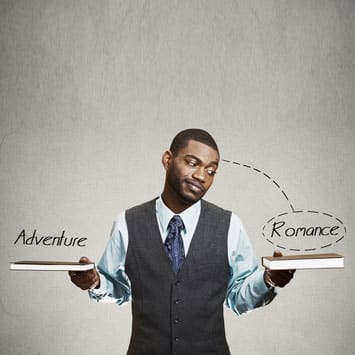 If you’re a novelist, it doesn’t matter how compelling your story is or how clean your writing is. You won’t get a literary agent to represent you unless you categorize your book correctly. Label your novel with the wrong book genre(s) in your query letter and you run the risk of getting “false positives” that will only lead to rejection.

In other words, if you unwittingly submit your query to the wrong agents and they ask you for more material, they’re going to reject it when they realize your book isn’t what you said it is. And, those agents probably won’t tell you why they’re rejecting your book.

You might think it’s your story or your writing style.

But you might have just gotten
your book genre wrong.

Since identifying the right book genre(s) is easier said than done, I’ve written this article to help you avoid the most common book genre mistake that I see every week as an author coach and consultant. That mistake is… confusing the major fiction categories: Commercial Fiction, Mainstream Fiction, General Fiction, and Literary Fiction.

So, scroll below now to find out what
your book really is—and isn’t.

Books in the Literary Fiction genre tend to be more “sophisticated” than books that are simply labeled as Commercial, Mainstream, or General Fiction. Examples of Literary Fiction authors include Barbara Kingsolver, John LeCarre, and Toni Morrison.

Think of it this way…

A badly written literary novel is like a good-looking person without any character. That type of person and that type of book might be interesting for a few seconds, but that’s about it. If you’re an author and you want to write “smart” fiction, please do. But try to write a novel that straddles the commercial/literary boundary.

That’s the best of
both worlds.

Some people use the term Commercial Fiction as a compliment; others use it as an insult (usually just Literary Fiction snobs).

Successful authors of Commercial Fiction sub-genres like those listed above are familiar with the conventions of their genre and they don’t stray very far from them. Readers of Commercial Fiction sub-genres expect certain things and, if you know what’s good for you, you’ll give it to them. For example, if you’re writing a Commercial Romance novel, you better not kill off one of your lovers a third of the way through your book.

So, what’s the difference between the two?

When literary agents say they’re interested in “General Fiction” they sometimes mean they’re generalists, eclectic and open to any type of well-written novel.

Putting It All Together – What Genre Is Your Book?

If you’re struggling to figure out which genre(s) your book fits into, you’re not alone. Look up any book on Amazon.com and BN.com and you’ll probably see subtle (or dramatic) differences in how the book is classified.

That’s because there’s often more than one way to correctly label a book. And because book genre definitions are impossible to define perfectly. Publishing professionals, at the highest level, often disagree about the definitions. Like so many other things in publishing, they’re subjective.

If you want help figuring out the best way to position your book… with the goal of securing a top literary agent, publisher, and book deal… click here now to see how you can schedule an Introductory Coaching Call with me.

Before we get on the phone (or Skype if you’re not in the United States), I’ll review any/all of the following that you have available and help you improve them (query letter, synopsis, book proposal, sample pages, etc.). Of course I’ll answer any questions that you have during our time together as well.