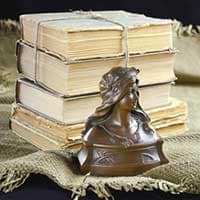 This guest post by author Martin Cohen, Ph.D., who’s sold more than 250,000 books, delves into the philosophy of writing–what to say and how to say it–to make your book worthy of literary agents.

There’s a passage in Plato, one that is as usual really addressing some obscure philosophical concept, that touches upon the writer’s experience. It is the observation that a sculptor in a sense discovers the statue in the block of stone. They chip, chip, chip away at it almost as if the figure already in some sense existed, was already there, and their job was only to reveal it. Indeed, it seems that some sculptors look at blocks of rock and intuit the statue that, one day, they will create from it.

This led to a joke published in appeared in “Boys’ Life” magazine in December 1963:

“How do you make a statue of an elephant? Get the biggest granite block you can find and chip away everything that doesn’t look like an elephant.”

I like that! It certainly seems to make a nonsense of the idea… but hold on. What makes the idea seem ridiculous (apart from the word elephant, an animal that seems to appear in more jokes than any other) is that suggestion that the sculptor holds all the information, knows all the details already. The original notion of discovering a beautiful statue in a block of marble highlighted just the reverse – the element of mystery.

A similar sort of process it seems to me, applies to writing – be it fiction or non-fiction. The author does not so much write a book as painstakingly reveal a book. That is why professional writers endlessly revise their manuscripts – and why a good editor can actually step in and say to their author “No, the book shouldn’t go like that – it should be more like this.”

But certainly, the author, like the sculptor, knows the disaster of the hammer blow that takes out a bit too much from the block of marble…

A friend of mine who went on to become a philosophy professor has written on his blog about a very different approach to writing. He states that when HE writes, he does it in essentially one draft, tidies it slightly, and then has it published. At least, that is, by a his university or another small press. His big idea was to spend time ‘thinking’ about the structure. “And because all the thinking has been done, I need produce only one draft,” he adds, with characteristic self-confidence.

My friend’s approach is, however, only about ‘what’ to say, not how to say it. In this distinction, it seems to me, lies the difference between merely producing words and actually being a writer. So, for authors, there’s no shame in revising a draft, and only a suspicion that those who aren’t doing so are maybe leaving their block of stone rather rough hewn.

Martin Cohen is the author of Philosophy for Dummies, Critical Thinking Skills for Dummies, and his latest work, I Think Therefore I Eat, about food and philosophy. Other projects include the How to Live books featuring “Wise (and not-so-wise) Advice from the Great Philosophers.” Martin is also known for two introductions to philosophy, 101 Philosophy Problems and 101 Ethical Dilemmas. These, despite being originally aimed at the academic market, between them have sold over 250,000 copies and been translated into 20 different languages.

Other books include an “anti-history” of great philosophers, Philosophical Tales; Mind Games: 31 days to rediscover your Brain; and The Doomsday Machine. Martin now writes full-time, but in the past has taught philosophy and social science at a number of universities in the UK and Australia, and was involved in a research project at Leeds University under George MacDonald Ross exploring ways to shift philosophy teaching away from the the mere study of philosophical facts and toward a view of philosophy as an activity.

An activist environmentalist, Martin wrote an influential series of articles in the Times Higher (London) about the politics of the climate change debate. He has written discussion papers on environmental concerns for the European Parliament and been invited by the Chinese government to discuss ecological rights and indigenous communities. Martin is also the editor of THE PHILOSOPHER, a journal founded in 1923, which counts some of the best known names in Twentieth Century philosophy amongst its contributors.

Question About Getting a Literary Agent?